A product of Silicon Valley 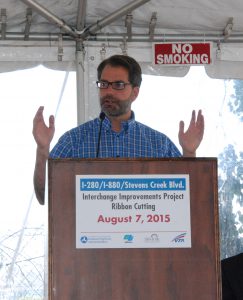 Pierluigi is the son of immigrant parents, Italo and Matilde, who are both retired teachers. The Oliverio family lived in an apartment on Willow Street for 10 years before buying their first and only home. Pierluigi is proud to have attended public schools in San Jose (Booksin Elementary, Hoover Middle School, and Willow Glen High). His strong work ethic started with a paper route in the 8th grade, and continued through out high school where he worked at a fast food restaurant on Winchester Blvd. While attending San Jose State University, Pierluigi paid his own way by working evenings and weekends at a restaurant on Bascom Ave. Pierluigi completed his teaching credential and classroom instruction in the San Jose Unified School District.

Pierluigi was elected in three consecutive elections to the San Jose City Council by a winning average of 74%. He represented the greater Rose Garden neighborhood, Santana Row, and Willow Glen. In addition to ten consecutive years of service on the city council, Pierluigi has 20 years of work experience in the technology field.

While on the city council Pierluigi managed 17,000 constituent issues, responding personally to every person 24/7. Pierluigi chose to do many of the daily tasks himself instead of hiring additional staff. He put the cost savings back into neighborhoods by planting trees, installing bike racks, replacing street lights, commissioning public art and funding traffic studies to enable lower speed limits by schools.

Councilmember Pierluigi Oliverio championed volunteerism, which allowed for extended library hours and the restoration of the San Jose Municipal Rose Garden. See the results firsthand and bring the family on Mother’s Day to witness a sea of color nurtured by volunteers.

Pierluigi is an ardent animal lover, and hosted the Internet Cat Video and Bow Wow film festivals as a fundraiser for cat and dog rescue groups. Pierluigi purchased the house next door to his parents on Cherry Ave, and is a parishioner of Saint Christopher’s Church.

Pierluigi was elected to the San Jose City Council in three consecutive elections.  During his tenure, he never missed a council meeting.  He served on the following Boards, Commissions, and Committees.