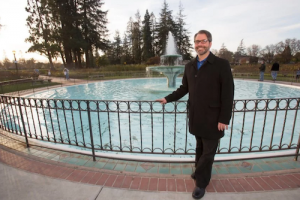 Never shy about speaking his mind, Pierluigi Oliverio left an undeniable mark in District 6 after spending 10 years as the area’s representative on the San Jose City Council.

Oliverio–who termed out at the end of the year and was succeeded by Devora “Dev” Davis–regularly stirred controversy, whether while going toe to toe with labor unions, pushing to give Lincoln Avenue a road diet or voting to raze the Willow Glen Trestle.

A regular fixture at community events who never missed a single council meeting, the bespectacled Oliverio was defined by his fierce independent streak, often casting the lone dissenting vote.

“What people don’t care for in government is when elected leaders make decisions based on relationships where the decision is ultimately bad but you did it for the relationship,” Oliverio said in an interview.

Although he won more than two-thirds of the district vote in his last council election, Oliverio was often a divisive figure even within District 6. Voting his conscience–sometimes against friends or campaign donors–was something he lived by, even when it cost him at least one longtime friendship.

“If you go into this job wanting everyone to like you, you’ll be severely disappointed,” he said. “If you always want to go the easy way, then nothing will ever get done.”

He learned that lesson after rezoning an industrial parcel to residential during his first council meeting, despite feeling it was the wrong thing to do.

Afterwards, he vowed to never be “unduly influenced” again.

“After I took stock of it a year later, I wrote an article saying, ‘One year, one regret, and I think this was not the best land use decision.’ The rest of my time was, ‘Don’t be influenced; make your own decisions.’ ”

There was a learning curve at first, but he relied increasingly upon his guiding principles of “common sense” and “fiscal pragmatism.”

“Ultimately, if you make the decision for the right reasons using data and what’s best for the long term, then that’s a good thing,” Oliverio said.

Still, he often weathered personal attacks online and sometimes in person, but took it all in stride. He blames much of the viciousness on the disconnected nature and lack of accountability on the Internet, which he says allows people to “write whatever they want, no matter how mean or false it is.”

Oliverio liked to demystify government bureaucracy by hosting topical documentary film nights at city hall; he says he also personally answered emails at all hours of the day and night.

“You try to educate residents on what the city does, what they can legally do, what they can fiscally manage, because not everyone cares about local government until it affects them,” Oliverio said.

During this year’s council race, Oliverio saw another opportunity to educate constituents by creating a voter transparency project where candidates cast mock votes on actual council items. That sparked residents’ interest to learn more, he said, and made him wish he had come up with the idea earlier.

“By sharing the outcome of the city council votes, many residents were inquisitive and wanted to learn more about items that sometimes don’t make the press,” he said. “Reporting out each week some of the significant council votes would’ve been interesting as an education process for the residents.”

Many have reached out to express their gratitude for him going to such lengths, Oliverio said.

“I think a nice moment–I have them a lot–is when someone sends you a very sincere email thanking you for your efforts,” he said. “You can’t buy that type of appreciation, it only comes through doing your job. I’m having a hard time deleting them.”

The man known for occasionally staffing the reception desk on city hall’s 18th floor to relieve employees has few regrets about his time on the council. Oliverio said he left without feeling burnt out despite keeping the smallest council office staff, but in hindsight wishes he pushed himself more.

“Instead of working 60 hours a week, I could’ve worked 65 hours a week,” he said. “But at the same time, having time off allows you to think and see things differently.”

For now Oliverio is easing into normal non-political life with a full-time job at a software company that allows him to occasionally travel–something he hasn’t been able to do much of the past decade.

Volunteer work at the San Jose Municipal Rose Garden, which he is proud of reviving at the beginning of his council career, should also keep him occupied, and too perhaps a game of gin rummy, which he enjoys. After an “extremely rewarding” era of occupying the dais, leaving is hard for him, but a run for county supervisor in 2018 is a distinct possibility.