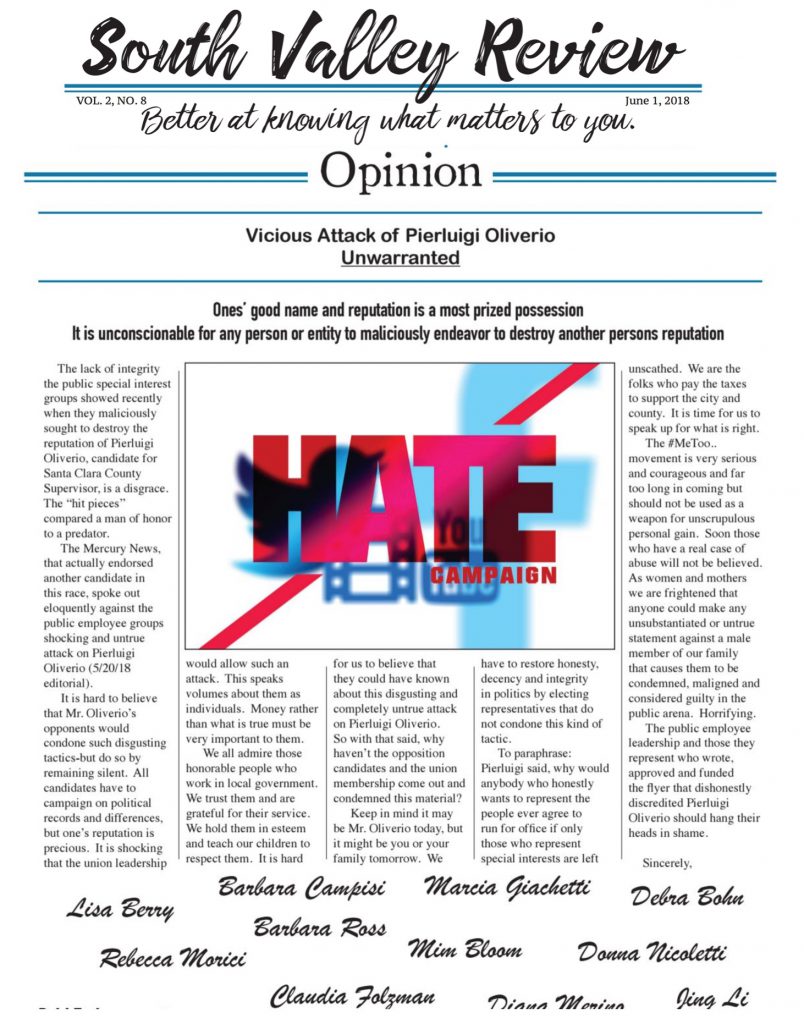 Ones’ good name and reputation is a most prized possession.

It is unconscionable for any person or entity to maliciously endeavor to destroy another persons reputation
The lack of integrity the public special interest groups showed recently when they maliciously sought to destroy the reputation of Pierluigi Oliverio, candidate for Santa Clara County Supervisor, is a disgrace. The “hit pieces” compared a man of honor to a predator.

The Mercury News, that actually endorsed another candidate in this race, spoke out eloquently against the public employee groups shocking and untrue attack on Pierluigi Oliverio (5/20/18 editorial).

It is hard to believe that Mr. Oliverio’s opponents would condone such disgusting tactics-but do so by remaining silent. All candidates have to campaign on political records and differences, but one’s reputation is precious. It is shocking that the union leadership would allow such an attack. This speaks volumes about them as individuals. Money rather than what is true must be very important to them.

We all admire those honorable people who work in local government. We trust them and are grateful for their service. We hold them in esteem and teach our children to respect them. It is hard for us to believe that they could have known about this disgusting and completely untrue attack on Pierluigi Oliverio. So with that said, why haven’t the opposition candidates and the union membership come out and condemned this material?

Keep in mind it may be Mr. Oliverio today, but it might be you or your family tomorrow. We have to restore honesty, decency and integrity in politics by electing representatives that do not condone this kind of tactic.

To paraphrase: Pierluigi said, why would anybody who honestly wants to represent the people ever agree to run for of ce if only those who represent special interests are left unscathed. We are the folks who pay the taxes to support the city and county. It is time for us to speak up for what is right.

The #MeToo.. movement is very serious and courageous and far too long in coming but should not be used as a weapon for unscrupulous personal gain. Soon those who have a real case of abuse will not be believed. As women and mothers we are frightened that anyone could make any unsubstantiated or untrue statement against a male member of our family
that causes them to be condemned, maligned and considered guilty in the public arena. Horrifying.

The public employee leadership and those they represent who wrote, approved and funded the flyer that dishonestly discredited Pierluigi Oliverio should hang their heads in shame.