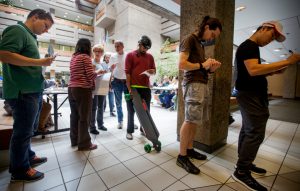 From my perspective, the goal of elections is to maximize voter participation, which broadens the democratic process and helps create a representative democracy that better reflects our society at large.

The way to achieve this goal is to move towards 100 percent absentee voting, also known as voting by mail. Gone would be the confusion of trying to find your latest polling place. Instead, voters would fill out their ballots in the privacy of their own homes.

Even when people are registered to vote, a significant portion of the electorate simply does not vote. There are a variety of reasons for this: too busy on election day, couldn’t wait in line, car trouble, illness, traffic, unexpectedly out of town, family responsibilities, etc.  So let’s remove the stress factor and allow voters to take their time, relax and vote their conscience.

This is not a new concept. Oregon and Colorado already have Universal Vote By Mail in place, and they have significantly higher voter participation. Both had voter turnout of more than 70 percent in 2014, the average for non-vote-by-mail states was 48 percent.

There are several advantages to Universal Vote by Mail. First and foremost, it would increase the number of people who vote. We have all seen situations at polling places on Election Day where there are significant waiting periods to cast your vote, sometimes several hours in line. Long waits are a particular hindrance to our senior, disabled and working poor population.

In Santa Clara County, absentee voters receive free postage and can verify on the registrar of voters website that their ballot has been received and counted.

There are environmental and economic benefits to not making voters drive to the polls or take the bus to polling places. Cost saving to taxpayers is also significant: With voting by mail, there’s no need to recruit, train and pay people to work the polls, to rent space for polling stations, transport voting equipment back and forth across the county or test that equipment.

Sacramento officials estimated it would save their county 19 percent per election, or roughly $1.05 per voter. The savings could be reinvested in technology enhancements, audits designed to identify and prevent voter fraud and voter information events.

Mailed ballots would also net faster election results. In Santa Clara County, we have sat through multiple election cycles during which the results are known faster in rural West Virginia than Silicon Valley. It is common to not know the outcome of some races for well over a week.

If county residents voted exclusively by mail, a majority of ballots would be returned before Election Day, and the likely election results would be known in the first hour after the polls close.

As I campaign for County Supervisor, I have come to realize that there is much confusion over what the county actually does (other than collect property taxes). Unlike meddling in the business of school districts, or re-litigating issues already covered by state or federal jurisdictions, operating the Registrar of Voters is actually one of the core functions of county government. This is a change that we can affect locally.

If Santa Clara County were to transition exclusively to voting by mail, the net result would be increased  participation, lower costs and faster election results.  These are changes that we should all support, and I strongly recommend that the county make this transition.