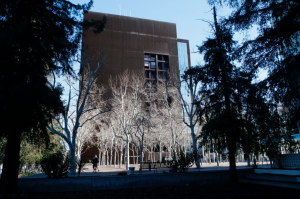 A proposal to add nearly $1 million to a Santa Clara County rebranding campaign was shelved on Tuesday. – Staff Photo

San Jose >> Santa Clara County has shelved a million-dollar branding effort — think matching logos on billboards and online ads — aimed at ratcheting up its profile and presence to the public.

The item, buried in the board of supervisors’ consent agenda — where noncontroversial items are automatically approved without discussion — was pulled Tuesday by County Executive Jeff Smith and postponed indefinitely.

“I took it off to see if we need to change it up, to reassess what’s needed,” said Smith. “We now know we have a marketing problem. How we approach it is another question.”

Some had questioned whether marketing was the best use of public money.

“There are great needs within our county such as mental health services,” said Pierluigi Oliverio, a former San Jose city councilman who is looking to replace Supervisor Ken Yeager when he terms out. “In my view it would be more prudent to allocate those tax dollars towards mental health care.”

But Board President Dave Cortese agreed the county has a marketing problem — people often don’t know what services the county provides them.

“You look at San Jose, they have a logo, and people know when they see it that they’re dealing with the city,” Cortese said. “We have people coming in and out of here from all over the world — business and tech people from Korea or India — and they need to know who we are, what
we do and where to find us.”

Said problem was analyzed for the county by Keating Co., a New York City-based firm that specializes in branding. The company “interviewed department heads, employees and clients and tried to get an idea of what they thought of how the county is communicating,” Smith said, and “came back with a lot of problems.”

“Look at a county parks advertisement next to a hospital ad,” Smith said. “You can’t tell from looking at them that these are both county services. We want to centralize our marketing, and have a centralized logo that’s common to all departments.”

He pointed to a recent ad campaign by Valley Medical Center that urges residents to “Go Public,” meaning choose the county as a health provider.

“The message doesn’t come across very well,” Smith said, adding that important services — and who provides them — often go unrecognized.

“From a client’s perspective, they get confused,” he said. “‘Is this the county? Who is doing this?’”

The initial contract with Keating was for $150,000. To fix the problems, Keating would have been hired through June of next year for an additional $850,000. Keating would provide “strategic brand and communications services and will develop a brand and narrative that incorporates the County’s point of view, including its focus on social reform and deep concern for the well-being of each and every citizen in the County of Santa Clara.”

Smith said there are a number of reasons he wanted to reassess the branding campaign.

“The whole process was started many months ago,” he said, “before there was clarity of what the budget would be like and even before the election and threats to our funding.”

But Mark Hinkle of the Silicon Valley Taxpayers Association said he was “flabbergasted” at the notion that county money would be spent on branding.

“People want a local government to provide police and fire and fix roads, and they can’t even do that,” he said. “You ask anybody who doesn’t work for the government how important their logo is, it’s concern 999 out of 1,000.”